What has life been like for Cal State Fullerton students during the pandemic?

In a new podcast series – “Beyond the Square” – a group of theatre and dance majors discuss topics such as online education, student mental health, industry expectations for performing artists, and how to stay creative and inspired during a live performance drought.

The six-episode series is featured on Titan Radio. A new segment will air weekly starting Monday, April 19. The students worked in pairs and were responsible for writing and directing each piece. The 10- to 15-minute podcast are also available on iTunes, Spotify and Stitcher.

Because of the pandemic, Zoom is now central to how students, faculty, and staff interact with each other.

What the students found during the making of the podcast is that students pivoted, improvised and learned to cope with a host of issues from strained relationships to the loss of a “normal” college experience.

During the pandemic, students have created virtual Zoom classrooms out of their personal spaces — bedrooms, garages, living rooms, backyards and even cars. Life and education intersected, and student learning continued.

A Twist on the Spring Production

Anne James, the project’s director and executive producer, said that last fall, she met one on one with her voice and movement students and was struck by all the challenges they encountered with virtual learning, COVID-19 and social distancing.

“On top of being students, many were also caregivers, primary wage earners for their families, parents,” James, a professor of theatre and dance at Cal State Fullerton, said. “They had these incredibly complicated lives. Yet, twice a week, in two and a half hour chunks, they sat down in front of their computers and reached for something bigger.”

James said these revealing talks moved her. And just like her students, she adapted and pivoted when she was asked to direct a spring production.

The idea of the podcast was born.

“We’d never done a podcast. I love podcasts,” she said. “What if we create a space to continue these conversations and create some connective tissue during a very fragmented time?”

She said the podcast’s name was born out of the idea that Zoom, the four-sided, one-dimensional, glowing box of light and faces, had become a lifeline and constant. A menagerie of mute buttons, breakout rooms, chats, “shares” and cameras, all delivered via indirect eye contact and spotty Wi-Fi.

For freshman Audrey Gibbs, it was the first time in a long time she felt like she could laugh with abandon.

“We were able to share and bond over the absurdity of the modern way of life,” Gibbs, a transfer student studying acting, said.

Musical theatre major Owen DiSciullo said the podcast was an opportunity to speak his truth about his online education experience.

“On some level, I have regained that sense of community,” DiSciullo said. “After being a part of this project, I can safely say that I never thought I could feel so close and comfortable with a group of people I have never touched.”

Joe-Joe Kelly, a junior seeking a Bachelor of Fine Arts degree in acting, said his favorite aspect about this project was the level of visibility and vulnerability.

“As theatre artists, we are called to not only inspire an audience but to inspire one another as well,” he said. “I don’t know that I would have been able to engage in such a personal way with my peers if it weren’t for the circumstances that allowed for this project to be produced.”

Freshman Brianna Medina, a theatre major, said she felt connected even though she hasn’t experienced what it’s like to attend on-campus courses at CSUF.

“I have made new friends and connections that I never thought possible via Zoom,” she said. “It has been such a hard time trying to make friends, and I’m so glad that I have, thanks to ‘Beyond the Square.’”

Expanding the Boundaries of Storytelling

James said the podcast was a chance for her to use a collaborative form called devised performance which incorporates technology and media into visual storytelling.

“Creatively, it can be incredibly empowering,” James said. “No one sits on the sidelines. Everyone has a stake. At our first rehearsal, I told the cast, ‘We are going to create something that doesn’t exist right now.’”

She said devising is an entirely different creative process that fosters resiliency, ownership, imagination and trust in the student’s inner artistic compass.

“Together, we figured it out,” she said. “At a time when we have all felt so isolated and silenced in many ways, this podcast gave students a place to use their voices and cultivate community.”

About the Author: Michael Mahi 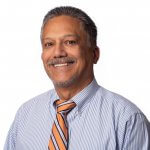 Michael Mahi is the Senior Director of Digital Media.