Posted on: March 25, 2020 in Faculty Stories by Cerise Valenzuela Metzger
Share this:

Admittedly, Matthew Kirby’s geological science lectures have a predictable punctuality. He often arrives at least 10 minutes early. And yet, “Let’s get started,” usually competes with the subtle noises of about 120 students settling in for the hourlong class.

The class taught by the professor of geological sciences was among the first to transition to an online format, just days after Cal State Fullerton’s announcement that it would shift to virtual classrooms in response to the COVID-19 pandemic. This time, only seven of the 120 students attended the class in person, and in the days that followed all students would be required to attend classes remotely.

At first, the silence was less than subtle. With so few people in the massive lecture hall, guests could pinpoint the exact moment sprinkles turned to heavy raindrops outside the doors.

Teaching via Zoom conferencing is a big change for most faculty. But change can be good, Kirby says.

“This is good technology for us to know anyway,” he says. “Times are changing, and more courses are going online. I look at this as an opportunity to make some changes and learn some technology. In a year, we’re going to look back and say ‘Wow, we did it. It’s done,’ and maybe we’ll have some skill sets that we didn’t before.”

Kirby says teaching online has resulted in more students participating via the platform’s chat option – a place where comments are typed — essentially speaking up during class. That’s something few dared to do in such a large class before, and a plus Kirby says he didn’t expect.

Students, at times, can be shy or intimidated. They don’t want to give the wrong answer, he says. But not today.

“There’s a lot more interaction and answers given in discussions,” he says after the class. “Even if they’re not the right answers, at least they’re interacting. That really helps me too, because otherwise, I’m just lecturing to a void. But this makes it seem a little more real.

“This transition, this change is not about the professors and how hard it might be for us. It’s about making this whole thing seamless for our students,” Kirby says.

“I’m going to try to make this as seamless as possible because fundamentally that’s what I’m here for — for them.”

About the Author: Cerise Valenzuela Metzger 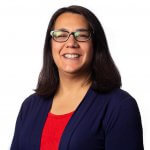