Baseball’s Ortiz Steps Up to the Plate Amid Pandemic

Posted on: July 16, 2020 in Athletics by Uriel Gutierrez
Share this:

In these trying times, with the coronavirus pandemic putting a nationwide halt on all college athletics, some players’ first seasons got cut short.

Miguel Ortiz was one of those players.

Ortiz, known by his teammates and coaches as “Miggy,” is a freshman on the Cal State Fullerton baseball team. With a .281 batting average, .442 on base percentage, three doubles, one home run, and three RBI, he was off to a hot start to his rookie campaign before it was cut short due to coronavirus.

With the nationwide shutdown, Ortiz had to head back home to Clovis, California, where he picked up a job at a grocery store to help his family out.

“It’s going well for the most part,” Ortiz said. “There’s some days where it’s slow and feels (like I’m there) all day, but some days go by pretty fast. It’s all worth it in the end.”

Ortiz took the job to help take a load off of his parents financially, as his dad’s business had to be put on hold during the pandemic.

“He runs a baseball academy and since we can’t gather with a lot of people and we can’t play baseball, it’s just on hold right now,” Ortiz said.

“It’s amazing,” Ortiz said. “This is my first job and I love it. I feel like I can finally give back to my parents because I’m making good money and I won’t have to worry because I’ll just get more next week. It’s an amazing feeling.”

Keeping a Routine During Coronavirus

As if getting your season shut down and having to pick up your first job wasn’t difficult enough, Ortiz also had to deal with transitioning to online classes, something which was a whole new realm for him. He saw this challenge and took it head on.

“I haven’t always been the brightest student, so it was a bit difficult for me, but I got into it,” he said Ortiz. “And with work it made it a bit harder. But I worked as hard as I could to finish the spring semester.”

As a student-athlete, he had to keep training to stay in playing shape for his next chance to take the field at Goodwin.

He explained that it was all about keeping a routine.

“The days I don’t work I usually practice with my dad after I’m done with my classes and homework, and then workout later at night,” said Ortiz, “And even the days that I do work, I work out after my job. So, I’ve been pretty consistent with my routine.”

Ortiz is just one of many student-athletes whose lives’ have been affected by the coronavirus pandemic. He has shown what it takes to be a Titan with his resilience and winning attitude. A fan favorite, he was voted by Titans fans as the 2019-20 Freshman Male Athlete of the Year. Titans fans can look forward to seeing him make plays in a Titans uniform in the upcoming season.

About the Author: Uriel Gutierrez 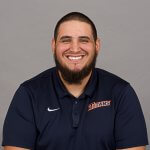 Uriel is the a graphics designer and the baseball and men’s soccer sports information director for Titans Athletics.